A little over a month ago, the ASP.NET team announced several changes and updates to the .NET Reference Source and in this post we are going to discuss how to actually integrate it into Visual Studio so that you can step into the actual .NET Framework source when debugging your applications.

What is Reference Source again?

Reference Source, if you are unfamiliar with it, was a project that Scott Guthrie and his team started back in 2007 in hopes of releasing the .NET Framework source to allow developers to easily reference it (without all kinds of decompilation and mischief) to see what was really going on under the hood. Shortly after that release, the team made a few changes that would allow developers to actually step through the source code which was a major step in a very cool direction. 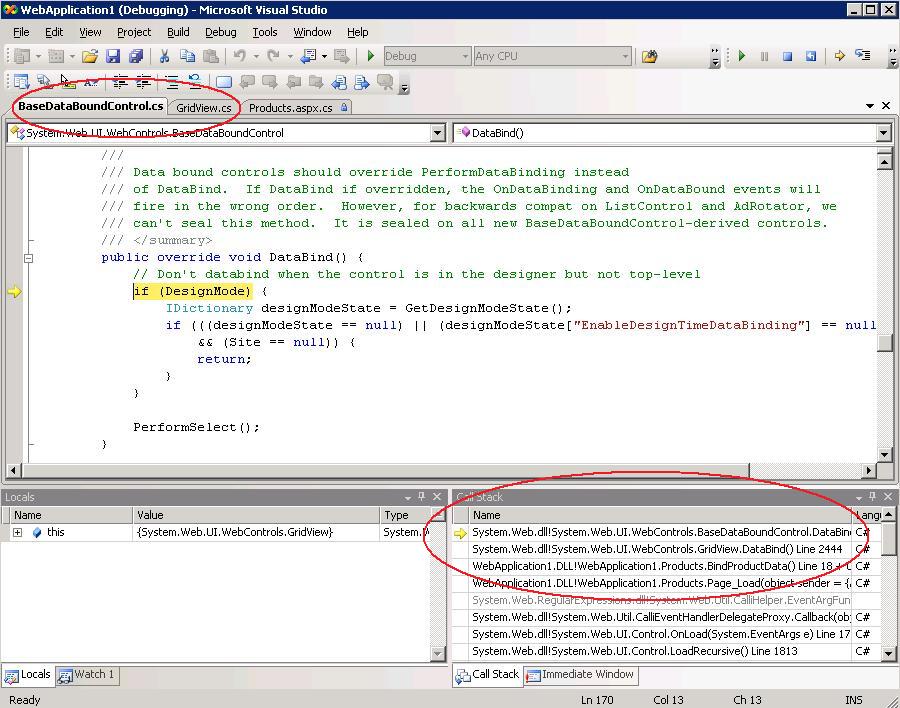 As part of this year’s announcement regarding Reference Source, it was mentioned that it would be joining forces with Microsoft’s latest development wonder, Roslyn.

Roslyn is a managed compiler-as-a-service that has really flipped the script in the .NET world recently. It provides all kinds of wonderful features that were simply not possible in previous years and has already been used not only by Microsoft but in many other arenas such as .NETFiddle, Bing Code Search, Semantic Merge and more. Roslyn was used to help generate a semantic index of the entire .NET Framework source to allow it to be searched through with the greatest of ease.

Currently, .NET 4.5.1 is indexed and readily available on the Reference Source site and the ASP.NET team announced a commitment to keep things updated with each upcoming release as they occur to prevent any stagnation that may have plagued the previous versions of the tool. So you can be relatively sure that whenever you are accessing the latest version of the Reference Source that it should be the latest and greatest. The improvements were not limited to just performance either.

The UI received a very stylish overhaul as well and yield some of the nicest looking documentation that you’ll come across :

Another undocumented feature is the tiny snippets of entertaining comments that you can find scattered throughout the source as well :

Putting it to Good Use

Let’s actually put the Reference Source to use along with Visual Studio 2013 and use it to debug an application by not only stepping through our own code, but into the source of the .NET Framework as well.

To get started, there are a few changes we need to make within Visual Studio that will allow us to target the Reference Source (which will primarily consist of enabling and disabling a bunch of properties in the Options menu).

Open up Visual Studio and navigate on over to the Options menu (Tools > Options > Debugging > General) as seen below : 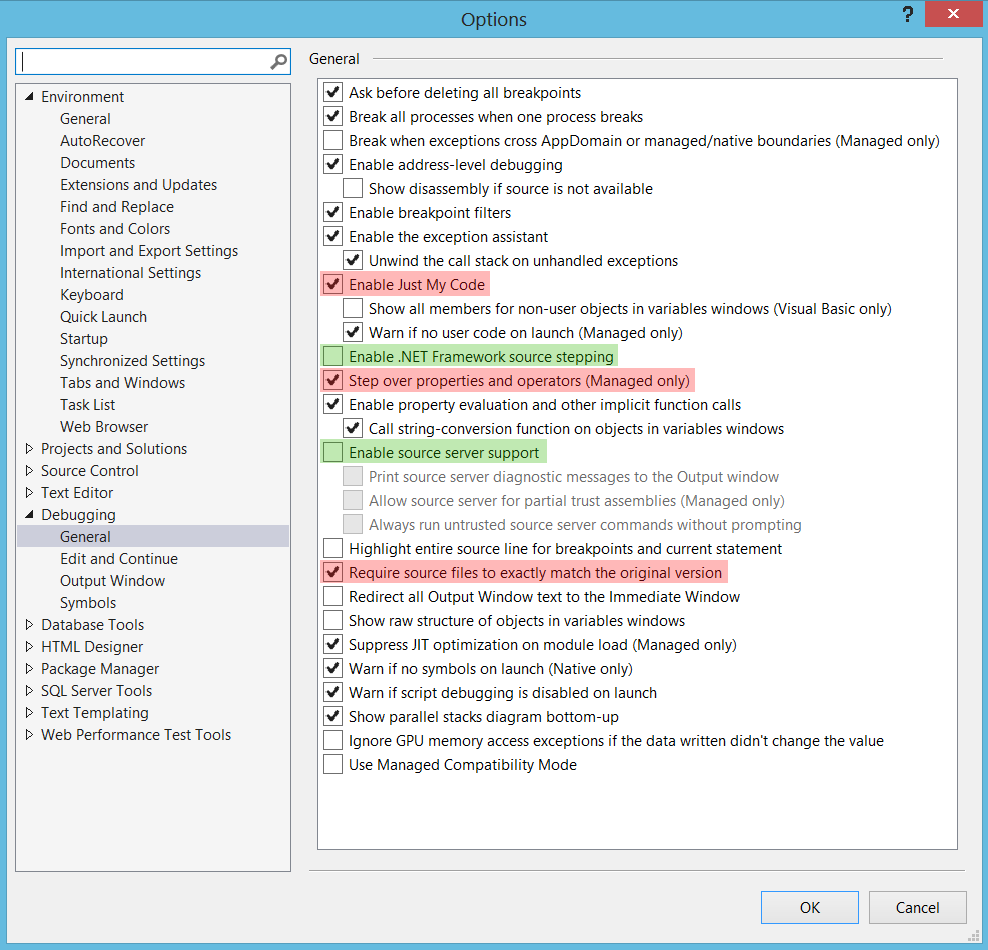 You’ll need to enable and disable a few options within the Debugging Options section of Visual Studio to get things working.

and enable these ones :

After making the changes, your options menu should look like this : 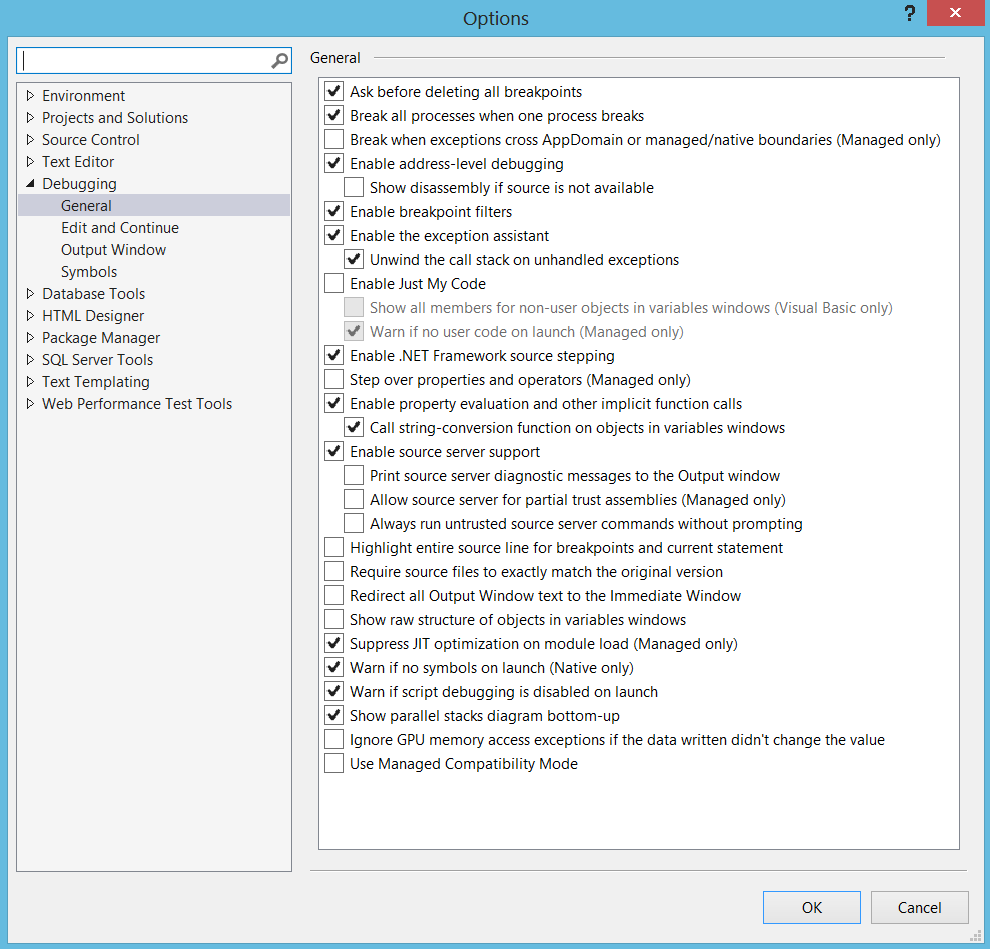 Then, you’ll need to make sure that when debugging that you are targeting the actual Visual Studio Reference Source. You can do this by accessing the Symbols area under Options (Tools > Options > Debugging > Symbols) : 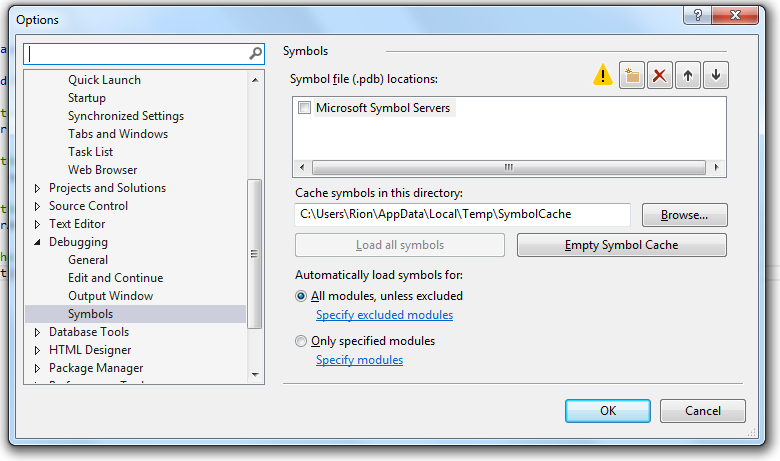 From here, you’ll want to target the Reference Source symbols available at http://referencesource.microsoft.com/symbols. You’ll need to click the Add Symbols option within the Symbols area and add the previously mentioned URL : 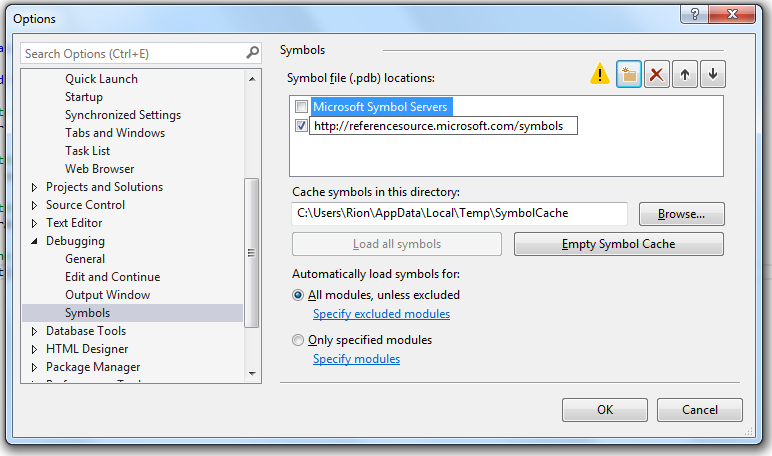 What I have found to be a safer and more reliable approach however, is to simply download the source and reference it locally from the following location :

After making those changes, you’ll need to ensure that the project that you are going to be debugging is targeting .NET 4.5.1. Debugging through Reference Source is going to currently be limited to 4.5.1 and above since those are the only actual versions of the .NET source that have been indexed so far.

Looking Under the Hood

Now that we have configured everything, let’s make a really simple program to demonstrate traveling through the source.

Using the simple program above, we will create a collection of numbers, randomly order them, store them in an array and then finally sort them using a variety of methods.

Let’s place a breakpoint on the first line and run the program.

When you hit your first breakpoint, right-click on the method (in this case System.Linq.Enumerable.Range) and you should see an option within the context menu called Step Into Specific which will allow you to send the debugger into the .NET source for that particular method as seen below : 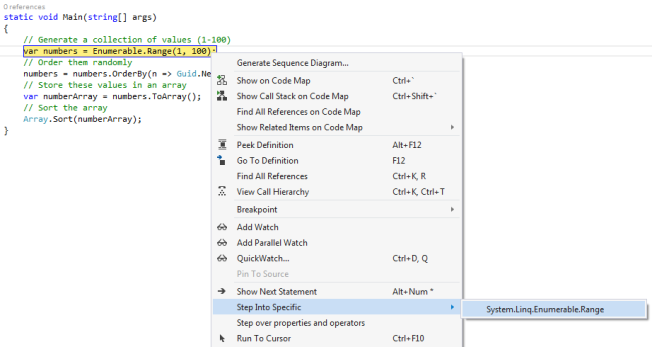 After selecting the method to step into through Step into Specific, you’ll see that the debugger jumps into the related .NET source and you can step through the method as you would expect within any other .NET application being debugged :

A few other caveats to consider if you are having trouble :

In this month’s installment of the Interesting List of Development Stuff, we take a look a quite a…

April 1st is a day that is frequently dedicated to pranks, bogus news and tomfoolery. Generally keeps everyone’s…