It hasn't been too long since the latest 2.0 release of Glyphfriend, but with the release of Visual Studio 2017 coming around the corner, there were a few things that could use some improvement and polishing off before then.

One of the issues that very quickly arose after the previous release of Glyphfriend was the noise, which was quickly pointed out in a response on reddit:

So any HTML file will have its auto completion filled to the brim with thousands of glyph classes regardless of whether any let alone all of them are actually available?

That doesn't really sound like an improvement to me.

All of the changes that were made to make the extension more flexible actually resulted in it being more noisy. Glyphfriend would just serve everything it knew about. This has generally been regarded as a bad move, and thus library filtering is how I went about fixing this.

Library filtering allows you to easily toggle which libraries you want to use, and it will persist across Visual Studio sessions. This updated version of the extension will now allow you to right-click on any supported file (i.e. HTML, CSHTML, etc.) and you'll see a Glyphfriend context menu containing all of the supported libraries: 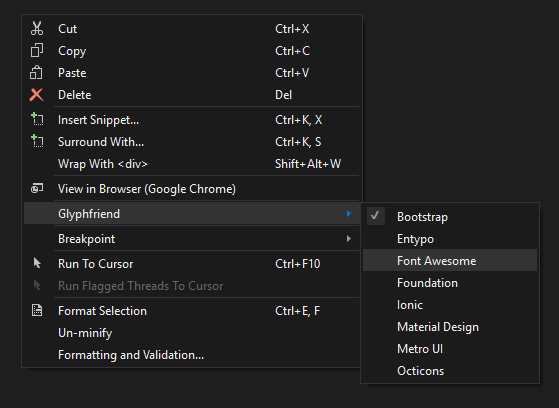 By default, only Bootstrap Glyphicons are enabled, but you can simply select one of the other items, and all of the available icons for that library will now be accessible through Visual Studio's autocompletion events as demonstrated below:

Glyphfriend will remember these settings and persist them even after you close Visual Studio.

The hope is that this feature tones down some of the noise that the extension was making; making it more specific to your needs and much easier to use.

As software developers, copy-pasting some code or a few files and having it in multiple places has always been…